What Real Estate Trends to Expect in 2015 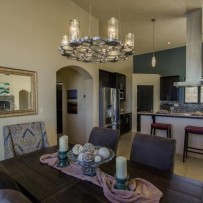 What Real Estate Trends to Expect in 2015

Experts predict investors will exit the market, clearing the way for traditional buyers and millennials. couple choosing paint swatch for new home Many millennials have held off on buying a home, but experts expect that to change in 2015.

More As housing recovers, prices in many markets across the U.S. have shot up. In fact, RealtyTrac reported that the median sale price of U.S. single-family homes and condos in October had reached its highest level since September 2008. Price appreciation and the lure of foreclosures created a feeding frenzy for real estate investors willing to pay cash and made it harder for traditional buyers to compete.

But experts say that 2015 will be marked by a return to normalcy and balance for real estate markets across the country. Stan Humphries, chief economist for Zillow.com, predicts that home value growth will slow to around 3 percent per year instead of the 6 percent seen recently, and that will make real estate less attractive to many investors. “It’s been a tough market for buyers,” he says. “I think it’s going to get easier in 2015. Negotiating power will move back to buyers and away from sellers. It will be a much more balanced market.” (Too many buyers and too little inventory, or the opposite, contribute to an unbalanced market.)

Redfin.com’s chief economist Nela Richardson agrees. “It’s been a clear pattern that the investor activity has been shrinking over time,” she says. “Investors like to go in where they can buy low and sell high. Price growth is starting to slow dramatically, so they can’t sell much higher than what they buy. Investment property is less compelling in 2014 going into 2015.”

More inventory and less competition from investors means even traditional buyers are becoming “more picky, and they’re willing to let a home go if they don’t think it’s a good fit for them,” Richardson adds. “Buyers are less worried that they’ll miss out on something. Houses are more like buses now. If you miss one, another one will come along.” Whereas buyers might waive contingencies in the recent past to make their offer more attractive to sellers, they’re now more likely to insist on contingencies for financing and inspections.

That said, foreign investors may still find high-end American real estate appealing because of economic turbulence in their home countries. For instance, the U.K. is toying with a so-called “mansion tax” that would apply to those who own properties worth more than 2 million British pounds (or over $3 million), and China has placed restrictions on homebuying in large cities. Some foreign investors also worry about currency fluctuations devaluing money they hold in their home countries. “That section of the market is still all cash – people buying up these huge places because it’s safer here than in their own countries,” says Herman Chan, real estate broker with Bay Sotheby’s International Realty in San Francisco.

Buyers from outside the U.S. may use their properties as a rental, a pied-à-terre (a secondary residence used for travel) or a residence for children studying at American colleges. But for buyers looking for more moderately priced homes, 2015 could offer a respite from bidding wars and all-cash offers. “People who’ve been on the fence about selling are finally going to pull the trigger, which is great for buyers [because it creates more inventory],” Chan says. “Now people with regular jobs and 20 percent down finally have a chance to get into the market.”

For years, many millennials have postponed homeownership in favor of renting, but that may also change next year as a growing number of Gen Yers start families and seek more stability. “By the end of 2015, millennial buyers will represent the largest group of homebuyers, taking over from Generation X,” Humphries says. “They prefer smaller units closer to the urban core, so it will be interesting to see whether they follow the time-honored path towards the periphery of the metro.”

Baby boomers are also likely to make a move in 2015. Chan says he’s “gotten so many calls from baby boomers recently saying, ‘We’re downsizing, and we’re moving to be closer to our grandkids or our son or daughter.'” With fewer homes underwater, they’re finally in a position to sell.

While mortgage rates may not remain at the historic lows seen recently, more people may qualify for home loans as issues like foreclosures or short sales age out of their credit reports and Freddy Mac and Fannie Mae ease mortgage eligibility. Freddy and Fannie recently announced a new mortgage program for buyers with a down payment as low as 3 percent. “Freddy and Fannie have always been the industry leaders, and they’re saying, ‘It’s OK to lend to people who don’t have 5 percent down. It’s OK to extend credit in a reasonable and safe manner,” Richardson says.