Master bathrooms, along with the average home’s overall footprint, grew larger in recent decades. And with more square footage came excessive luxury and expense—tubs with aromatherapy kits, exotic countertop materials, coffee makers, small refrigerators, and showers for two with an arsenal of body sprays that performed like a human-sized car wash.

But changes are afoot. As homes have decreased in size, many people prefer to put any extra space into other areas of the house, such as closets, says Stephanie Pierce, senior manager of the design studio at MasterBrand Cabinets. They also don’t always see the need for more than one tub in the house, and often there’s already one located in bathrooms designated for children or guests.

Concern about getting money that’s been invested in a remodel back at resale is another driving force spurring home owners to spend less on master bathrooms. It’s tough to justify significant expenditures when buyers seem to attach greater value to adding a deck or replacing a garage or entry door, according to the 2015 “Cost vs. Value” report. Bathrooms remodeled with upscale finishes and fixtures, for example, cost around $54,115 this past year and returned only an estimated 60 percent of that in the sales price. Less costly midrange redos brought back a better return of 70 percent, according to the same survey.

Yet, having a personalized, functional master bathroom with a touch of luxury remains a buyer priority. “People aren’t going to the extreme they once did, but they want a room that looks fresh,” says Sarah Barnard, a designer in Santa Monica, Calif.

Rather than relying on trends from the hotel industry as has been popular in years past, Elissa Morgante of Morgante-Wilson Architects in Chicago says, home owners are more likely to use their own needs as inspiration. Case in point: Nikki Wheeler resisted a designer friend’s advice when remodeling her master bathroom in her 1890s Denver home.

“She was pushing me to knock down walls to create a magnificent oasis. I thought with an older, more historic home, creating these giant hotel-style bathrooms didn’t fit,” she says. Wheeler kept within the existing footprint, adding a vaulted ceiling and upgrading the shower, countertop, cabinets, and floor.

Making these types of changes can make a big difference when selling, says sales associate Paul Wyman of The Wyman Group in Kokomo, Ind. An outdated bathroom requires a lot of work, and most buyers will favor a house with a redone bathroom over an unfinished one, he says.

Today’s understated master bathrooms are influenced by the following eight style categories. Encourage your buyers and sellers to pick and choose which upgrades or which categories to focus on to come up with their own personalized take on this trend: 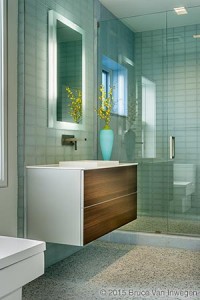